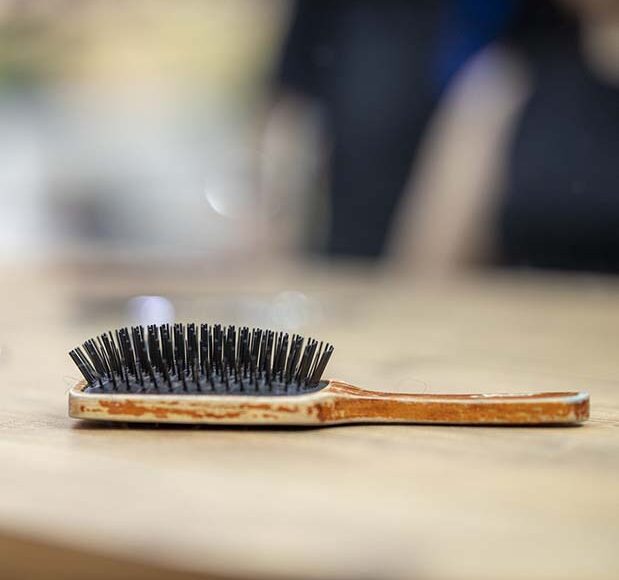 In this month’s blog, I’m delighted to share a story from Beth Moore. It’s about compassion and a hairbrush. I cry every time I think of this story.

Seventy or eighty of us filled a commuter area of the Knoxville airport. I could see activity over my left shoulder, and finally I glanced out of the corner of my eye. I will never forget what I saw. An airline hostess was pushing a wheelchair with an old man who looked not a day younger than 127 years old.

I’ve never in my whole life seen a human being look that old and that weary and that drawn. I tried to keep from staring, but he was such a strange sight. Humped over in a wheelchair, he was skin and bones dressed in clothes that obviously fit when he was at least twenty pounds heavier. His knees protruded from his trousers, and his shoulders looked like the coat hanger was still in his shirt. His hands looked like tangled masses of veins and bones. The strangest part of him was his hair and nails.

Stringy grey hair hung well over his shoulders and down part of his back. I had walked with God long enough to see the handwriting on the wall. I’ve learned that when I begin to feel what God feels, something so contrary to my natural feelings, something dramatic is about to happen. And it may be embarrassing. I immediately began to resist because I could feel God working on my spirit and moving me toward the man. I started arguing with God in my mind.

Don’t get me wrong. I don’t have a problem with sharing the gospel with someone I love to share Jesus, but this was a very peculiar-looking man in a setting that seemed a bit unconducive to spiritual awakening. Then I heard His commanding voice loud and clear. When I say God spoke to me, it wasn’t an audible voice. Like most of you, I would have instantly morphed into a corpse.

Rather, a very clear statement entered my mind that I knew wasn’t my own thought or imagination.

Do I witness to the man or brush his hair? No brainer. I looked straight back up at the ceiling and said, “God as I live and breathe, I want you to know I am ready to witness to this man. I’m on this, Lord. I’m your girl! You’ve never seen a woman witness to a man faster in your life! What difference does it make if his hair is a mess if he is not redeemed? I’m on him, I’m going to witness to this man!” Again, as clearly as I’ve ever heard an audible word. God seemed to write this statement across the wall of my mind,

“That’s not what I said, Beth. I don’t want you to witness to him. I want you to brush his hair.”

I looked up at God and quipped, “I don’t have a hairbrush. It’s in my suitcase on the plane, for crying out loud! How am I supposed to brush his hair without a hairbrush?” God was so insistent that I almost involuntarily began walking toward the man as these thoughts came to me from God’s Word. “I will thoroughly finish you unto all good works” (2 Tim 3.7 KJV).

I knelt down in front of the man and asked as demurely as possible, “Sir, may I have the pleasure of brushing your hair?” He looked back up at me and said, “What’d you say?”

“May I have the pleasure of brushing your hair?” To which he responded at volume ten. “Little lady, if you expect me to hear you, you’re going to have to talk louder than that.” At this point I took a deep breath and blurted out, “SIR” (No, I’m not exaggerating) “MAY I HAVE THE PLEASURE OF BRUSHING YOUR HAIR?” At which point every eye in the place darted right at me. I was the only thing in the room more peculiar than old Mr. Longlocks. I watched him look up at me with absolute shock on his face and say, “If you really want to.”

Are you kidding? Of course I didn’t want to! But God didn’t seem interested in my personal preferences right about then. He pressed on my heart until I could utter the words, “Yes sir, I would be so pleased. But I have a little problem. I don’t have a hairbrush.” “I have one in my bag,” he responded. I went around the back of that wheelchair, and I got down on my hands and knees. I unzipped the stranger’s old carry-on hardly believing what I was doing. I lifted out undershirts, pajamas, and shorts until I finally came to the bottom of the bag. There my fingers wrapped around the familiar bristles of a brush. I stood up and I started brushing the old man’s hair. It was perfectly clean, but it was tangled and matted. I don’t do many things well, but I must admit I’ve had notable experience untangling knotted hair mothering two little girls. Like I’d done with either Amanda or Melissa in such a condition, I began brushing at the very bottom of the strands, remembering to take my time and be careful not to pull.

A miraculous thing happened to me as I started brushing that old man’s hair. Everybody else in the room disappeared. There was no one alive for those moments except that old man and me. I brushed and I brushed and I brushed until every tangle was out of that hair. I know this sounds so strange but I’ve never felt that kind of love for another soul in my entire life. I believe with all of my heart, I – for that few minutes – felt a portion of the very love of God. That He had overtaken my heart for that little while like someone renting a room and making Himself at home for a short while. The emotions were so strong and so pure that I knew they had to be God’s.

His hair was finally as soft and smooth as an infant’s. I slipped the brush back into the bag, went around the chair to face him. I got back down on my knees, put my hands on his knees, and said, “Sir, do you know Jesus?” He said, “Yes, I do.” Well, that figures. He explained, “I’ve known Him since I married my bride. She wouldn’t marry me until I got to know the Savior.” He said, “You see, the problem is, I haven’t seen my bride in months. I’ve had open-heart surgery, and she’s been too ill to come see me. I was sitting here thinking to myself, “What a mess I must be for my bride.”

Only God knows how often He allows us to be part of a divine moment when we’re completely unaware of the significance. This, on the other hand, was one of those rare encounters when I knew God had intervened in details only He could have known. It was a God moment, and I’ll never forget it.

Our time came to board, and sadly we were not on the same plane. Oh, how I wished we had been. I was deeply ashamed of how I’d acted earlier and would have been so proud and pleased to have accompanied him on that aircraft. The airline hostess came to get him, and we said our goodbyes, and she rolled him on the plane.

I still had a few minutes, and as I gathered my things to board, the airline hostess returned from the corridor, tears streaming down her cheeks. She said, ‘That old man’s sitting on the plane, sobbing. Why did you do that? What made you do that? ’I said, ‘Do you know Jesus? He can be the bossiest thing!’ And we got to share. I learned something about God that day. He knows if you’re exhausted, you’re hungry, you’re serving in the wrong place or it is time to move on but you feel too responsible to budge.

Tell Him your need! I got on my own flight, sobs choking my throat, wondering how many opportunities just like that one had I missed along the way .. all because I didn’t want people to think I was strange. God didn’t send me to that old man. He sent that old man to me.

*Excerpted with permission from “Further Still” by Beth Moore