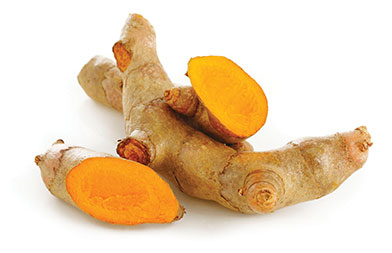 Spicing Up Your Protection Against Breast Cancer

When it comes to cancer protection, no plant puts up a better shield than the Indian spice, turmeric (Curcuma longa). The medicinal benefits of turmeric are so extraordinary; it has been the subject of more studies than any other plant—over 8,000 to date! These studies have documented over 150 different ways that this spice supports your health.
All of turmeric’s medicinal magic is held in its rhizome (root). When you slice across a fresh turmeric root, a vibrant, almost iridescent, bright-orange pigment radiates from its interior.

Scientists have discovered that the substance which produces the spellbinding color—curcumin—is also responsible for many of turmeric’s medicinal benefits. However, a 1997 study indicates that curcumin may not be the whole story of turmeric’s anticancer power. Researchers removed all of the curcumin from a sample of turmeric, and then tested the curcumin-free turmeric for antitumor effects. They found that the anticancer qualities of curcumin-free turmeric were more potent than those of whole turmeric with its curcumin intact.

Turmeric helps to impede the initiation and growth of cancers in four major ways:
•    Breaks down toxins in the liver and prevents carcinogens from forming
•    Radically reduces inflammation
•    Neutralizes oxygen free radicals with an antioxidant power that is 300 times greater than vitamin E
•    Supports the immune system

Turmeric also emulsifies fat, so it helps to promote weight loss. Keeping your weight down is important, because obesity raises the risk of many cancers including breast cancer. And if you have cancer, turmeric enhances the effectiveness of chemotherapy against your tumor while it protects your organs from the damage that these drugs often cause.
HOW TURMERIC HELPS YOUR LIVER DETOXIFY
Turmeric works with your liver in an ingenious way to get rid of the toxins in your body. Your liver has two sets of enzymes, called “phase 1” and “phase 2” enzymes. When a toxin or carcinogen, such as benzopyrene, which is found in cigarette smoke and charcoal-broiled meats, comes to the liver, phase 1 enzymes activate it. In other words, the toxin isn’t a carcinogen until the phase 1 enzymes in your liver turn it into one. Why would your body want to create carcinogens? Because they are easier for phase 2 enzymes in your liver to recognize. Phase 2 enzymes attack carcinogens, break them down, and get rid of them. The problem comes when you overwhelm this system. When too many toxins come into the liver, some of them will escape the mechanisms designed to eliminate them.

Your risk of cancer can be reduced by blocking the activity of phase 1 enzymes, reducing the number of carcinogens formed or activated, or by enhancing the action of phase 2 enzymes, eliminating more carcinogens. One of the reasons that turmeric is so effective against cancer is because it has the ability to both block phase 1 and enhance phase 2 enzymes.

TURMERIC AND BREAST CANCER
In addition to the general anticancer effects mentioned above, turmeric also has a number of amazing properties that specifically help to prevent and fight breast cancer. For example, some pesticides, such as DDT and chlordane, mimic the estrogen molecule in your body and thereby increase your risk of breast cancer. Turmeric can block the pesticides’ estrogenic effects. It also impedes breast cancer tumors from forming in response to estrogen and environmental toxins.

Turmeric also “down regulates” the estrogen receptor. That means it decreases the sensitivity of the estrogen receptor, reducing its normal response to estrogen. In other words, turmeric affects the estrogen receptor in such a way that when estrogen attaches to it, the rate at which breast cells divide is much slower than normal. However, when it comes to turmeric’s ability to combat breast cancer, it could care less whether a tumor is sensitive to estrogen or any other hormone for that matter. This extraordinary anticancer spice discourages the growth of every type of breast cancer: estrogen/progesterone positive or negative, HER2/neu positive or even triple negative.

Another one of turmeric’s very beneficial attributes is that it inhibits or blocks an enzyme that plays a key role in inflammation, as well as the initiation and growth of several types of cancer, including breast cancer. It’s called the COX-2 enzyme. The amount of the COX-2 enzyme found in breast cancer tumors is frequently much higher than in normal cells. Scientists call it “overexpression of the COX-2 enzyme.”
The COX-2 enzyme is responsible for a long list of dangerous tumor-promoting actions:
•    Encourages tumor cells to divide
•    Prevents the death of tumor cells
•    Stimulates the growth of new blood vessels into tumors
•    Helps tumor cells invade into the surrounding tissues
•    Blocks the important tumor-suppressing effects of the immune system
•    Increases the risk of metastasis
•    Speeds up the production of mutagens.

The good news is turmeric is able to shut down the COX-2 enzyme and in doing so, thwarts all its harmful actions. If you have breast cancer, turmeric’s anti-COX-2-enzyme abilities can be tremendously helpful:
•    Prevents tumors from growing
•    Induces apoptosis (cell death)
•    Inhibits cell proliferation
•    Stops the growth of new blood vessels that tumors need in order to grow
•    Halts the production of a substance called IL-6 (by your immune system), which makes cancer cells grow faster.
•    Helps to prevent tumors from invading into surrounding tissues
•    Dissuades tumors from metastasizing to other areas of your body

TURMERIC’S OTHER HEALING EFFECTS
Turmeric has an impressive array of other health benefits, too. For example, if you have gallstones, it encourages your gallbladder to expel them. Turmeric aids digestion by increasing stomach secretions and decreasing the amount of gas produced in the intestines. It also protects against stomach ulcers. Turmeric lowers your risk of heart disease by decreasing cholesterol and the formation of plaque in your arteries. It promotes wound healing by decreasing inflammation and stimulating the growth of new blood vessels.
You can also apply turmeric topically to your skin for another whole set of benefits. Turmeric can kill bacteria. It is also effective for treating fungal infections, such as athletes’ foot, and skin conditions, such as psoriasis.

TAKING TURMERIC
Turmeric is prepared by soaking and then drying the root. The dried root is then ground into a fine powder. Turmeric powder can be found in the spice section of most grocery stores. It is also the main ingredient in curry powder. Remember, organic is always best. Ayurvedic physicians recommend adding about one-quarter to one teaspoon to your food near the end of cooking.

You can also take turmeric as a supplement. At least 1000 mg (1 gram)/day is the minimum recommended dose if you are healthy. If you have a condition that turmeric can help to improve, some studies have given up to 4 to 10 grams a day without negative side effects. Although there is no established standardized dose for cancer treatment and prevention, most researchers recommend doses over 2 grams a day.

Because the healing benefits of turmeric are so extraordinary; most experts agree you should consume it every day. Cooking every day with turmeric is not practically for most people, so I recommend that you take a supplement that contains at least 1000 mg. You can find more information about these supplements on my website: www.drchristinehorner.com.

By Christine Horner, M.D.
Christine Horner, M.D. is a board certified and nationally recognized surgeon, author, expert in natural medicine, professional speaker and a relentless champion for women’s health. She is the author of Waking the Warrior Goddess: Dr. Christine Horner’s Program to Protect Against and Fight Breast Cancer, winner of the Independent Book Publishers Award 2006 for Best Book in Health, Medicine, and Nutrition.  www.drchristinehorner.com.