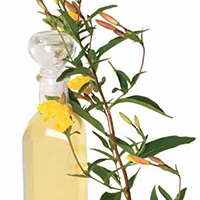 Fat You Can Love

There are certain fats that are bad for us and promote disease, and others that are very good for us because they help to protect ward off disease and keep us healthy. Previously I wrote about the health benefits of omega-3 fatty acids found in flaxseeds and certain fish like wild caught salmon, and omega-9 fatty acids found in olive oil.

The health benefits range from lowering your risk of breast cancer, to helping reduce hot flashes and symptoms of PMS, to improving arthritis, and inflammatory skin conditions including eczema and psoriasis. It may even help you to lose weight.

Although our bodies can manufacture it, we often don’t make enough for a variety of reasons. Also for certain disease conditions, taking extra amounts of GLA seems to significantly help.

Evening Primrose oil and GLA in general, appears to mount a powerful defense against breast cancer. In laboratory tests conducted at Northwestern University and published in the Journal of the National Cancer Institute in November, 2005, GLA was found to inhibit the Her-2/neu gene and increase the tumor-cell killing ability of the anticancer drug Herceptin by 30 to 40 times!

In another study published in the International Journal of Oncology in 2004, GLA was found to inhibit the expression of a critical enzyme involved in the synthesis of fatty acids in mammals called fatty acid synthase (FAS). This enzyme is important for breast cancer because it is found to be overexpressed, meaning is produced in excessive quantities, in Her-2/neu breast cancers. GLA was found to decrease the activity of FAS by 75% and was the most effective of all the oils tested. When FAS levels are low, it causes an accumulation of toxins in the cancer cells and causes them to die.

If you are currently being treated with chemotherapy for breast cancer, you’ll be interested in knowing that earlier research at Northwestern University demonstrated that GLA also enhances the effectiveness of several other chemotherapy drugs used for breast cancer, including Taxol, Taxotere, Navelbine, Tamoxifen and Faslodex. In addition, GLA contains superb anti-inflammatory and antioxidant properties which help to impede the growth of cancers.

GLA can also protect against some of the damaging side effects of chemotherapy, especially nerve damage called neuropathy that manifests as numbness and tingling. A study published in the Journal of Nutritionin November 2003 reported that evening primrose oil may help protect against and improve this type of nerve damage.

Patients with diabetes frequent suffer from another type of nerve damage called peripheral neuropathy. Like the nerve damage caused by chemotherapy, patients with diabetic neuropathy suffer with numbness and tingling of their extremities. This lack of sensation may lead to unrecognized injuries of the feet and subsequent infections. Several studies, including one that was published in 2003 in the Journal American Board of Family Practice, show that evening primrose oil significantly improves this condition.

In a meta-analysis (a review of many studies) of randomized placebo-controlled clinical trials of evening primrose oil for atopic eczema, there were clear improvements in itching, crusting, edema, and redness. Other studies show evening primrose oil improves a variety of other skin conditions and autoimmune disease including psoriasis, systemic lupus erythematosus, and multiple sclerosis.

Evening Primrose oil has been shown to help alleviate hot flashes associated with menopause and has modest benefits for PMS as well. For women who suffer with painful breasts, especially around their menstrual periods—a condition called cyclic mastalgia–evening primrose oil may be extremely helpful. In a study published in the British Medical Bulletin 1991 and another in the prestigious journal the Lancet, evening primrose oil improved the symptoms in 77% of patients with cyclic mastalgia.

Because evening primrose oil has excellent anti-inflammatory and antioxidant qualities, it should not be surprising that studies show it helps relieve the severity of the common inflammatory conditions ofosteoarthritis and rheumatoid arthritis

Finally, GLA may be beneficial for those who are overweight, because according to a study published in CCL Family Foundationsin 1993, it assists the body in using fat better.

Gamma linolenic acid is definitely a fat you can love!