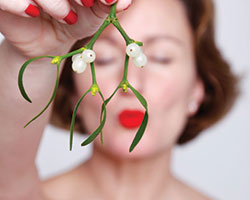 Kisses and Much More

by Christine Horner, MD
Perhaps one of your favorite activities is putting up the mistletoe during the Holidays and getting a special someone to give you a kiss. But did you know that mistletoe can also help you if you have breast cancer?

Yes—kisses really do help you to heal, but mistletoe offers much more. The plant itself has several properties that can help you to tolerate your treatments better and even improve your survival!
It’s no secret that chemotherapy takes a toll on your quality of life. Mistletoe preparations, also known as Iscador, have been frequently used by breast cancer patients in Central Europe and research shows that these patients report a better quality of life.

Mistletoe has also been shown to help fight breast cancer tumor growth in a number of ways. A 2006 German study reported that when mistletoe extract was injected into breast cancer tumors in mice, the tumors shrank, the rate of cell division decreased, and there was increased tumor cell death. Another 2006 study conducted in Norway, found that mistletoe extract worked to decrease tumor growth through several different mechanisms, including stopping new blood vessels from growing which feed tumors (anti-angiogenic) and by making tumor cells more sensitive to being killed (apoptosis) by a cancer-fighting substance in our immune system called “tumor-necrosis factor.” Knowing of mistletoe’s various anti-cancer effects makes it easy to understand why a study published in the European Journal of Medical Research in 2006 found that breast cancer patients receiving mistletoe, in additional to conventional therapy, had longer survival times than those who received conventional therapy alone.

Mistletoe isn’t the only plant that can benefit you in fighting breast cancer—there are many—which is why choosing what to take can sometimes be so overwhelming and confusing. My advice is to work with a naturopathic oncologist who has been trained in complementary cancer therapies. Traditional Chinese Medicine doctors can also be a great resource. There are a few herbs from Traditional Chinese Medicine which your doctor may recommend that can provide exceptional support for your cancer care. One of those herbs is ginseng, a root of a plant commonly used in China, and also widely available in the US.

Kills Cancer Cells
Dozens of studies conducted in the last decade consistently show that Panax ginseng not only stops breast cancer cells from growing, but also kills them by a process known as apoptotic cell death. One such study was conducted in Seoul, Korea and published in the journal Cancer Research in 2005. Another study published in Life Sciences in Nov. 2004 found that ginseng killed cancer cells more effectively than several chemotherapeutic agents including epirubicin, 5-fluorouracil and cyclophospamide!

Enhances Chemotherapy
You may want to seriously consider taking ginseng if you are currently undergoing chemotherapy treatment. There are numerous studies showing that ginseng increases the tumor cell killing abilities of chemotherapy. For example, a study conducted at the University of Cambridge in the United Kingdom found ginseng enhanced the ability of mitoxantrone to kill human breast cancer cells. Another study published in 2004 and conducted at the University of British Columbia found that ginseng could make tumor cells that were multi-drug resistant much more sensitive to chemotherapy. A third study from Harvard Medical School found American Ginseng (Panux quinquefolius) used concurrently with breast cancer therapeutic agents resulted in “a significant suppression of cell growth for most drugs evaluated.” They concluded that American ginseng worked synergistically with breast cancer chemotherapeutic drugs to stop cell growth.

Improves Quality of Life
Ginseng has also been found to improve the quality of life of breast cancer patients. In a study published in the American Journal of Epidemiology in 2006, researchers at Vanderbilt University studied ginseng and breast cancer patients in China. One thousand four hundred and fifty-five breast cancer patients were recruited for the Shanghai Breast Cancer Study from August 1996-1998 and were followed through 2002. Twenty-seven percent of the patients were ginseng users before their cancer diagnosis. Compared to those women who had never used of ginseng, their death rate was significantly lower. The women who began ginseng after their cancer diagnosis tested much higher than nonusers for Quality of Life scores. Psychological and social well-being and overall quality of life improved as cumulative ginseng use increased.

How to Take Ginseng
Ginseng comes in standardized doses in capsules that you can purchase at most health food stores. The recommended dose is 1 to 2 grams daily. It is possible to overdose on ginseng, so don’t take more than what is recommended. Massive overdoses can bring about Ginseng Abuse Syndrome characterized by hypertension, nervousness, insomnia, hypertonia (muscle rigidity), edema, morning diarrhea, inability to concentrate and skin eruptions.

Christine Horner, MD
Christine Horner, MD is a board certified and nationally recognized surgeon, author, expert in natural medicine, professional speaker and a relentless champion for women’s health. She is the author of Waking the Warrior Goddess: Dr. Christine Horner’s Program to Protect Against and Fight Breast Cancer, winner of the Independent Book Publishers Award 2006 for Best Book in Health, Medicine, and Nutrition. For more information see page 38 or visit www.drchristinehorner.com.